There is no reasoning with a Great White shark.  No point in begging for your life.  Mercy?  Compassion?  Empathy?  Sharks have no such concepts in their cognitive library.  They are human concepts, after all… On the contrary, it is in the nature of a shark to stalk, hunt, strike, kill and consume.  A shark that rips you to pieces and fills it’s belly on your shredded flesh is not a morally dubious creature.  It is, in the Aristotelian sense of the phrase … simply a “good shark”.

Violent psychopaths and sharks are not too dissimilar.  Both appear to have a nature as deadly as it is unyielding.  Toward sharks, however, we direct only our fear, awe and admiration, but toward psychopaths we direct our righteous judgment, anger and moral outrage; indeed we punish them on the grounds that they could have acted otherwise.  In many US States they execute them.  But modern neuroscience and genetics are forcing hard questions upon us all.  Tough moral questions that as a society we cannot afford to ignore.  No longer can we allow antiquated reasoning and unsupported moral assumptions to guide our approach to criminal justice.  The scientific data doesn’t give us this option. 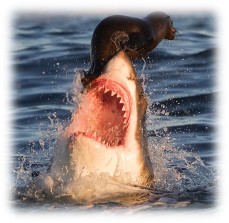 Try this riddle out for size – and beware – for this riddle, unlike any other, is one that you don’t want to solve.  One which if you answer correctly reveals that you are a psychopath… Okay … maybe that’s a little too dramatic…  If you arrive at a particular answer to the following riddle and settle upon it very quickly, without much deliberation or analysis, it may mean that you think like a psychopath and not necessarily that you are one or may become one.  Indeed, the riddle on its own may say nothing significant about you whatsoever, for to identify a psychopath one must employ a broad range of diagnostic tools:

A young girl attends the funeral of her mother at which she meets a young man whom she does not know.  She judges him to be the man of her dreams.  However, they fail to exchange contact details.  A few days later the young girl murders her own sister.  The question which then follows and which has been put to several serial killers is very simple: for what reason did she murder her sister?

Your first thought is the most interesting one.  Was it a crime of passion?  Had the murdered sister committed some wrong for which she became the victim of revenge?  These are the typical answers I get from my students when I present them with this riddle.  But neither betray the mind-set of the psychopath. The answer is mercilessly logical:

Not knowing how to contact her gentleman friend, the young girl murdered her own sister, hoping that the same man who had attended her mother’s funeral, would reappear at her sisters’ funeral whereupon they might resume their romance.

Now, that may have been your first thought and, indeed, you may have thought of it very quickly and its probably the case that you have not one psychopathic bone in your body!  It’s a perfectly logical answer, after all.  But it’s an answer that reveals so very much about how little psychopaths tend to value others.

What then are the typical features of psychopathy?  To start with, they are Olympically selfish.  They lack empathy; which is not to say that they don’t understand how you feel, but, rather, they simply don’t care to imagine… They are unmoved by your suffering which makes it far easier for them to manipulate, hurt and even kill you.  The pioneering psychologist Bob Hare to whom we owe much of our present understanding in this area has spoken of a “vast repertoire of behaviors” available to the psychopath with which he or she manipulates those around them with such expertise that their true nature remains concealed:

“…There is an idea of a Patrick Bateman; some kind of abstraction. But there is no real me: only an entity, something illusory. And though I can hide my cold gaze, and you can shake my hand and feel flesh gripping yours and maybe you can even sense our lifestyles are probably comparable… I simply am not there.” From the film, American Psycho (2000)

So, at the very severe end of psychopathy, who are we talking about?

Ted Bundy murdered over thirty young women all of whom had a similar hairstyle as his ex-girlfriend.  He was the prototypical violent psychopath inasmuch as he looked perfectly normal.  Some women found him charming.  He was intelligent, cool under pressure, supremely confident in his own abilities which extended to him representing himself in his trial without the aid of a lawyer.

“You feel the last bit of breath leaving their body. You’re looking into their eyes. A person in that situation is God…”  Bundy. 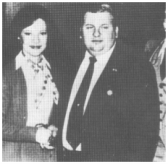 John Wayne Gacy murdered over thirty young adolescent men, luring them to his home on the promise of a job in his construction business.  There, he tortured, sodomized and murdered them, after which he buried their corpses in the crawlspace underneath his house.  He was the classic psychopath inasmuch as he led a perfect double life.  He was, by all outward appearances, happily married, economically successful and well respected in his community.  Indeed, he would often dress up like a clown at the weekend and entertain children at birthday parties, all the while notching up one more brutal murder after another.

“I should never have been convicted of anything more serious than running a cemetery without a license.”  Gacy 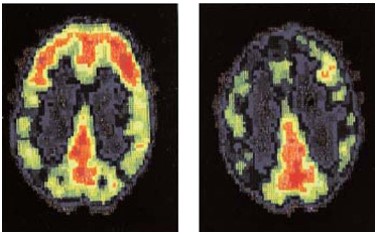 Science tells us that the brains of violent psychopaths have distinctive features: the brain on the left is of a “healthy” subject where all regions of the brain are functioning as you would expect.  The brain on the right, however, is the brain of a murdering psychopath.  Note that the front of the brain has nothing like the same activity as the brain on the left.  This is the pre-frontal cortex, an area of the brain associated with emotion and desire.  What if some psychopaths simply lack the neurological means to restrain their emotions, particularly the most powerful emotions of all?  If the brain isn’t functioning normally and the brain is the locus of all our thoughts and actions, can it make sense to attribute responsibility to psychopaths for their actions?  Evidence also suggests that violent psychopaths tend to have a low activity gene group also associated with violence called the MAOA gene, sometimes referred to as the ‘Warrior Gene’.  The existence of these faulty genes, together with abnormal brain function, contributes to a new and disturbing picture of serial killer causality.

So what should we do with violent psychopaths?  What as a society should be our response?  Well, what about treating them as we would treat patients who are mentally ill?  Sadly, there is no drug that can cure or treat psychopathy unlike the many forms of medication that can treat Schizophrenia for example.  Research shows that when psychopaths are placed in a mental institution they do not improve, but instead, will tend to mimic the symptoms of other patients in order to manipulate, harm and otherwise control their environment.  Traditional therapy or counseling has proved equally useless in treating a psychopath as therapy only works if the patient is prepared to be honest in what they share.  But you can’t believe a word a psychopath says.  They are expert liars, so, therapy hasn’t yielded any success.

But perhaps, we can be sure about what, as a society, we should not do with psychopaths … We shouldn’t punish them. 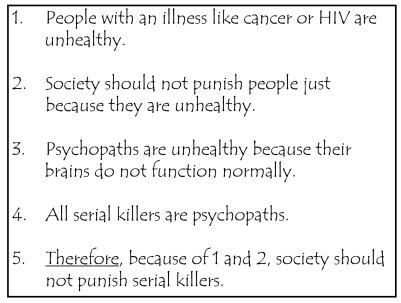 I would hope that premises 1-2 are relatively uncontroversial and not something anyone would wish to contest.  Premise 3 has been demonstrated above in the brain scan comparison.  Now, some might take issue with premise 4 and wish to claim that one can be a serial killer but not a psychopath.  I would say in reply that if you are engaged in the behavior of murdering people, concealing your crimes, sometimes taking trophies from your victims in the form of items of clothing and/or body parts – and you are committing these murders not for any political or religious motive, but purely for self gratification… then, necessarily, you are a psychopath.

Thus I would contend that if the reader accepts premises 1 – 4 as being true and valid in form, then they must accept the conclusion that society should not punish nor execute serial killers.  The concept of punishment presupposes the reality of freedom of the will, which, in the case of psychopaths (whether free will is something none of us have is for another discussion) translates to a brain deficiency whereby they lack the neurological means to exercise the same restraint exhibited by the average person.  Punishment becomes immoral when applied to someone who could not have acted other than they did.

So if we can neither cure, treat nor punish serial killers, what is the moral and just thing to do with them?

I am not the author nor the owner of any of the pictures used above.